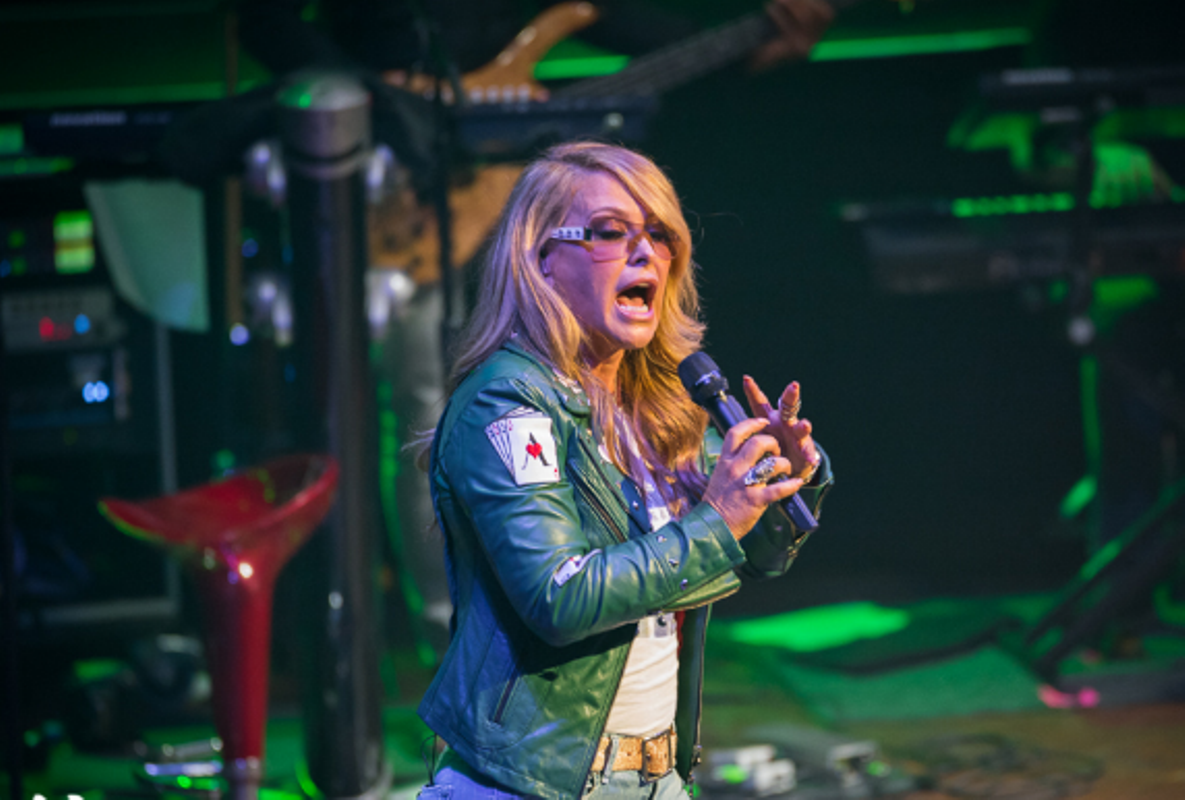 Pint sized vocal legend, Anastacia appeared on Stage at the Royal Concert Hall, Nottingham to thunderous applause. As she walked through a giant letter ‘A’ to the beating of drums it was obvious by the smile on her face that she was in a good place. Despite being 15 minutes late to the stage the crowd had gotten behind her instantly as she launched into the first of her ‘Ultimate Collection’ , ‘Army of me’, written by Christina Aguilera, Jamie Hartman, David Glass, and Phil Bentley.

With a career that has stretched over a lot of ‘times’ as she prefers to call it (in excess of 20 years) this amazing 48 year old powerhouse has had her fair share of ups and downs; She has been battling with Crohns disease from her early teens and if that wasn’t enough, she has fought breast cancer not once but twice;

Recent years have seen good times for this diminutive singer, she only stands 5’2’. Her Ultimate Collection, released in 2015, quickly reached Silver by selling in excess of 60,000 units, reached No 10 in the UK album charts and No13 in the UK digital charts. She has also sold more than 30 million albums worldwide to date and, last year, appeared on the BBC’s Strictly Come Dancing, partnering Brendan Cole!

Working her way through an impressive set which includes, ‘Sick and Tired’, ‘Stupid Little Things’, ‘Paid my Dues’ and ’Cowboys and Kisses’, it’s too easy to forget that this ‘Sprock’ ( her own singing style, a mash up of soul, pop and rock. ), sensation has had those pre mentioned bouts of ill health. Her stage presence if phenomenal as she dances with her backing dancers, musicians, singers as she powers her way through each song.

Her performance, always powerful and often moving, connects each song to a certain time in her life. Suggesting that music is a powerful healer, not realising that her song ‘You’ll Never be Alone’ written for her god daughter, was to become the anthem that the fans would choose to use when sending her get well messages after she was diagnosed with breast cancer only a year after its release.

With this song she also plays tribute to Arianne Grande, and the awfulness that was Manchester, inspite of that she thanks everyone for coming to the show. The crowd is now asked to remain seated, as she’s only small, she climbs from the stage and walks along the front row whilst still singing ‘You’ll Never Be Alone’, stopping to take selfies, enjoy hugs and meet her fans, one of which, a young fan in a wheelchair gets extra as she give Anastacia a rose!, ‘I’ve not forgotten you lot in the balcony’ she shouts as she returns to the stage to finish the song.

Several costume changes were made throughout the evening, A green leather jacket, a black and red floral maxi dress and finally back to ripped black jeans and studded motorbike leather, each dress change featured the band and the excellent dancers, sometimes contemporary sometimes street the pair gave the audience an excellent show including the disco medley as it’s become, which included snippets from , ‘Good times’, ‘Get Lucky’,’ Uptown Funk’,’ Pull Up To The Bumper’, ‘Oops Upside Your Head’, and finally ‘Super freak’.. Enough time for Anastacia to get into her biker gear come back on the stage ready for the 3 girls to knock out ‘Not That Kind of Girl’, Why’d You Lie To Me’!

The band get a round of introductions and a chance to show off, Urtho the bass player slaps out some funky bass lines and Gary on drums, plays a game with the crowd, getting them to clap back what he’s just drummed, until he gets bored and knocks the hell out of the kit much to the delight of the cheering crowd !!

Foo Fighters’ Best of You’ is up next, just before she drops into the anthem that is ‘I’m Outta Love’, this has the crowd back on their feet dancing, but as is often the case, it finishes quickly and Anastacia has left the stage. All is dark, which is a good thing as they only turn the house lights on when the artist has left the building.

The band return and start jamming, the dancers have their backs to the crowd and are both playing the violin. I know there are 2 more songs to be had, ’Left outside Alone’ and ‘One Day in Your Life’. Lights strobe around the band flashing rhythmically to the beats being laid down by the band, another costume change?

Boom spotlight on, straight into my eyes as I’m watching the dancers, what’s going on? I look to my left and less that 1m away is Anastacia. She has come up onto the balcony to meet and greet the fans like she did with the front row earlier. Obviously a woman who is close to her fans, she walks along the balcony, after a brief sit on my lap, bugger my phone’s not to hand for a selfie, she carries on, often leaning over to connect with those further away she wanders through the balcony crowd singing, smiling for pictures, shaking hands with the fans. The security, ever alert, in control but relaxed, remained close but never compromising the show or the connection. A great moment arranged by Anastacia’s Tour Manager and the local RCH Management.

And then she’s racing back down to the stage to finish the show, and what a show.

Anastacia has a voice that belies her tiny stature. She has, yet again, put on a show that has captivated the 2000 plus crowd that have paid to see her. The show has showcased that amazing talent, and what a talent she is!!

The Ultimate Collection, a cracking night, so good in fact I had to buy the Tour Tee Shirt on my way out! Testimony in itself!!

Who’s Gonna Stop The Rain chosen via the live app

Welcome To My Truth

Heavy On My Heart

Piece Of A Dream

I Belong To You/ il Ritmo Del Passione ( duet with Ramazotti )

Why’d You Lie To Me

Best Of You (Foo Fighters Cover)

I’m Out Of Love

One day In Your Life

|
(Dancers interlude costume change), 5th June, Anastacia, Army Of Me, Best Of You (Foo Fighters Cover), Cowboys And Kisses, Disco Medley ( Good Times/Get Lucky/Uptown Funk/Pull Up To The Bumper/Ooops Upside Your Head/Super Freak.. Costume Change, Green leather, Heavy On My Heart, I Belong To You/ il Ritmo Del Passione, I’m Out Of Love, Left Outside Alone, LifeLine, Not That Kind, Nottingham, One day In Your Life, Paid My Dues, Piece Of A Dream, Royal Concert Hall, Sick And Tired, Stupid Little Things, Welcome To My Truth, Who’s Gonna Stop The Rain, Why’d You Lie To Me